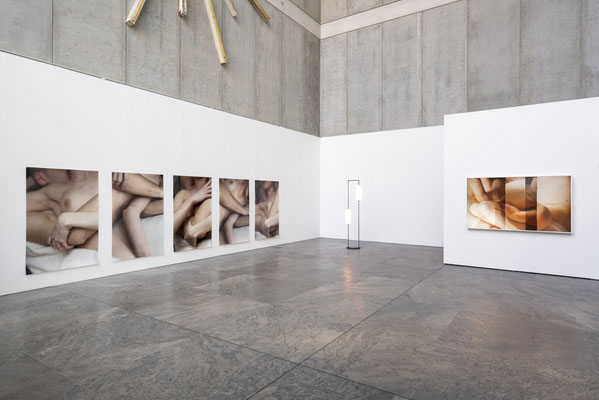 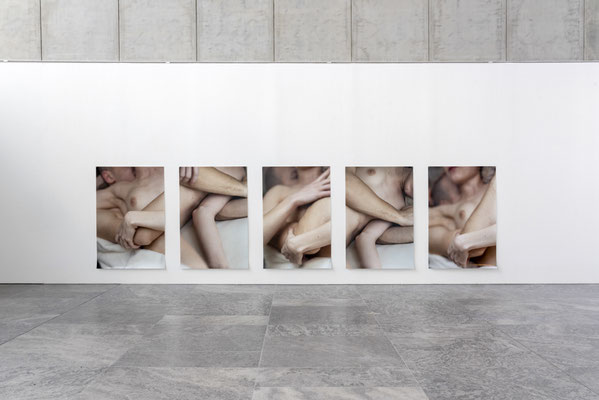 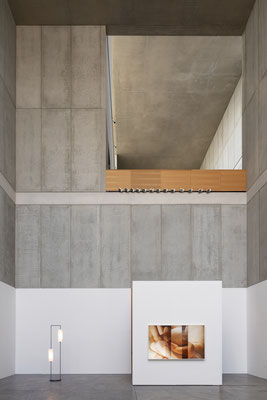 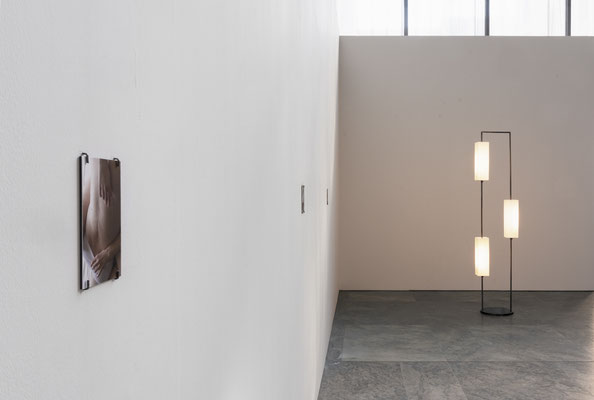 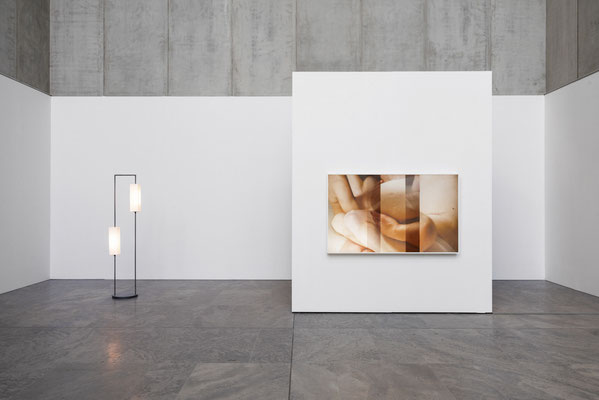 NOT ENOUGH at Museum of Fine Art, Leipzig, Germany, 2018

In »NOT ENOUGH« Ramona Schacht isn’t trying to offer a solution to the viewer. In her photographic work she explores how people manage their relationships, the types of interpersonal relationships which exist and how they work. For this series she photographed polyamorous couples. Intimacy is conveyed in these works through frozen moments of worn facial expressions. Impressions that appear only briefly. We seldom notice them in ourselves, but often see them only in our counterpart.
To capture them, motion blur is an important tool in her work. For her, the fact that this becomes the codification of an ever-changing feeling for imagery, is more important to her, than the reduced-voyeuristic view of parts of the body, which by their very individual nature - scars, burn marks, wrinkles - deviate from the socially normalized ideal. 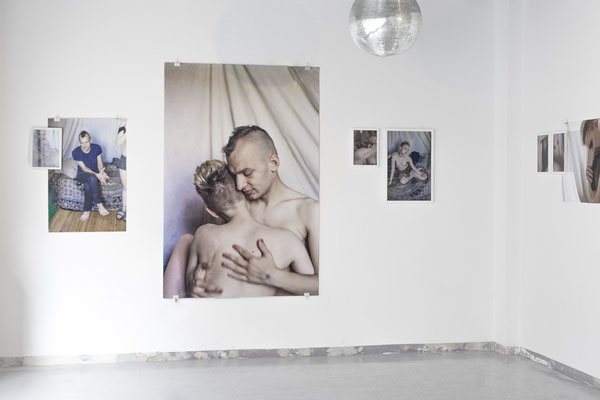 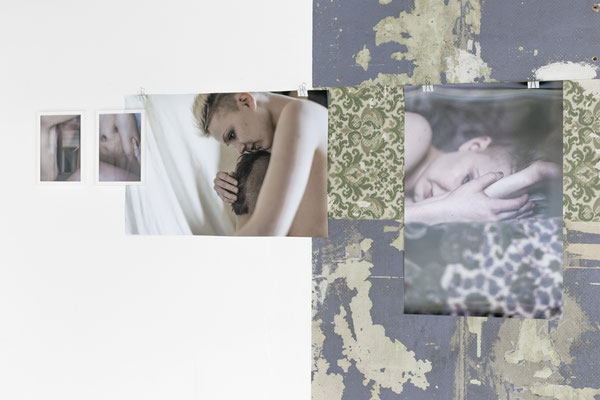 Keywords that want to capture the zeitgeist of the younger generation.
Ramona Schacht, a Leipzig-based photographer, was born in 1989. She is part of this generation and deals with these phenomena in her photography. She is particularly interested in the relationship between human relationships.
Never before have so many opportunities been open to young people as they are today. "Being young seems to be a hard fate, especially if you have to go through this phase of life in a Western city in the 21st century," she says.
About Millennials, you often read articles that paradoxically complain of work-shy and indecision as well as career fixation and the urge to self-optimizing. So how do young people live today and how do they want to live?
This is the initial question that Schacht poses in her work.

She observes and explores how interpersonal life is concretely lived in partnerships and in the community, which forms of relationships there are today and how these relationships are conducted. What changes there are in our life together and how they are shaped by digital communication. In her photography, Schacht mainly works with portraits in which she examines interpersonal relationships, as in her series Jona. Here, you ask to what extent we are willing to reveal intimacy and how it can be shown in photography. Thus, the photographic process becomes a togetherness by dissolving the photographer's voyeuristic position.
Relationships and forms of coexistence become strange in her series In dreams time is curious and in It depends or their video work Let's note in the skin.
Schacht works mostly with photography or videos that emerge from her photographs, they are both analog and digital.
Her works can be commented upon each other in her exhibition presentations, bringing the works into ever new contexts and creating a juxtaposition of the different themes of her works.
Formally, she often works with the same motifs in different formats and hangs framed photographs next to wallpapered or clips attached to the wall. Thus, within a work she creates a juxtaposition of the individual photos which stimulate the viewer to a more intensive and differentiated discussion.

Ramona Schacht's older photo series, show worker portraits in which she has perceived the people from outside in their work environment. Her current work now has a clear focus on more intimate situations and the documentation of interpersonal relationships and ways of life.
Her position as a photographer has evolved from being a voyeuristic observer to an important conceptual element of her photography that makes her part of the privacy of her models. 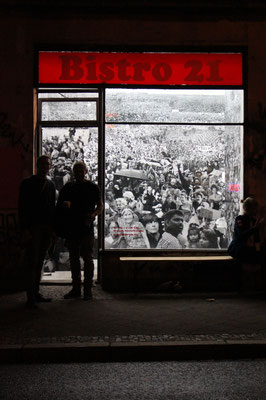 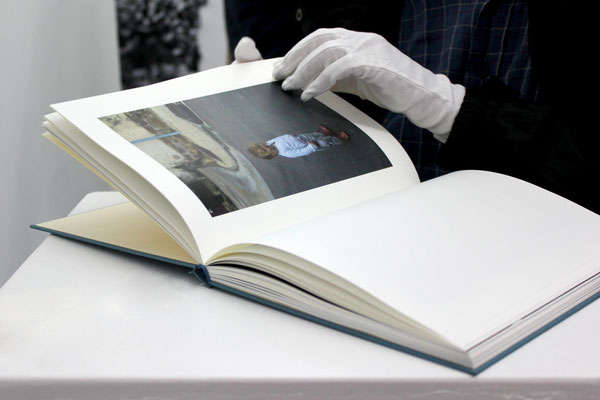 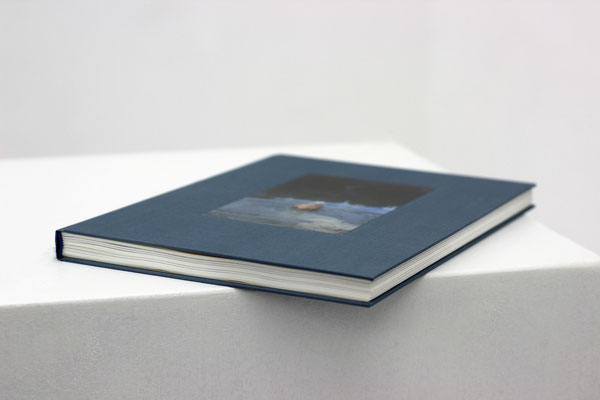 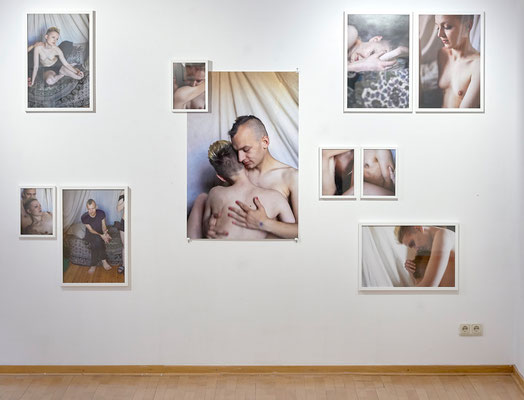 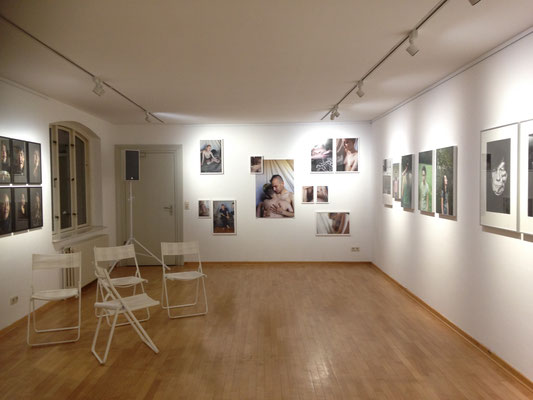 IT DEPENDS at Kunstverein Rostock, 2017 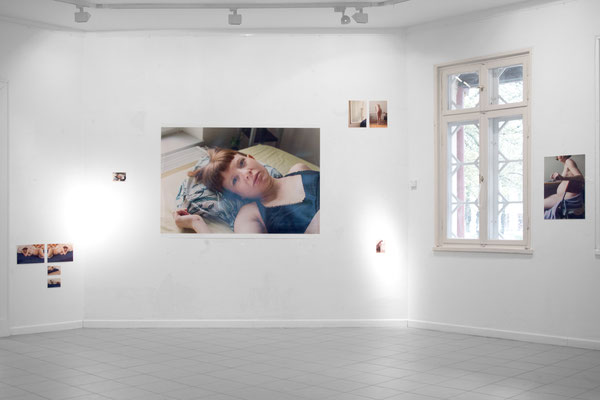 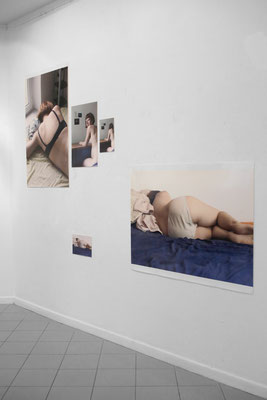 In Ramona Schacht's work, the human portrait has played an important role since she was a student. Be it in drawing, painting or photography. Particularly impressive are black and white photographs from the series Menschenbilder or Horst, in which she shows people in their work environment and their roots in the landscape. They are touching, close, no frills, but with a deep insight into the lifework of the portrayed, which shows in their faces facing the camera and their comprehensive scenery. After her move to Halle and then to Leipzig, her photographs have changed: there are no longer exclusively individual portraits, the movement becomes a pictorial element, she concentrates on color photography and uses, for example, photography. T. significantly larger formats. The photographs now show their interest in humans as a social being, their use, the departure from the perhaps too rigidly conserving black-and-white photography and the motion blur as a permissible part of documenting and as an image-aesthetic moment. Ramona Schacht photographically examines topics of her generation, which is also called "Generation Maybe". Loneliness becomes visible, non-binding, openness. It points to models of relationships that realign living together, but also challenge human opportunities. In the series such as "The Self-Administration of Desire I and II" or "Jonah", works from the latter series can be seen here, they no longer shows the idealized, focused on the face, preferably on the camera frontal portrait in a representative environment , It's more about downsides, domesticity, intimacy. Their protagonists are photographed from all angles, visible in the whole body portrait or unusually cut. During her shootings she does not light up her models, she creates a familiar atmosphere, she documents them in a home environment, allows intimacy and sheer boundaries. In the exhibition presentation, Ramona Schacht sometimes hangs one and the same motif in large format next to a standard format in order to question the viewer's expectation of the interaction of content / degree of intimacy and appropriateness of image size.